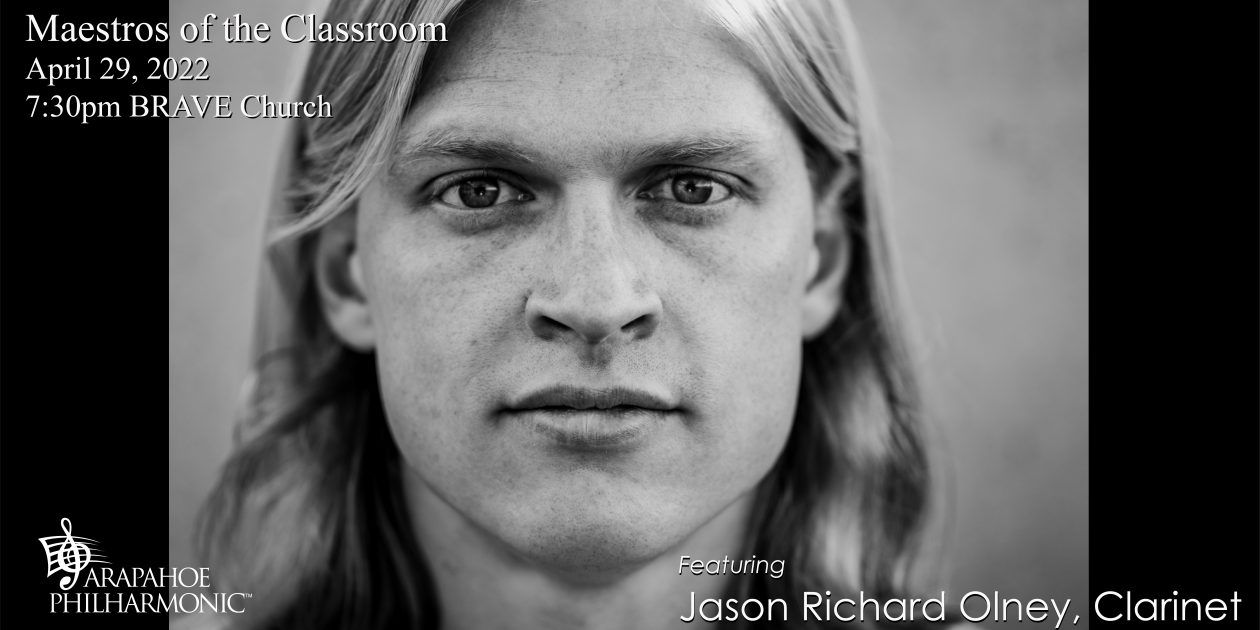 Jason Richard Olney, our fantastic principal clarinetist, will be featured on our April 29th concert on Eric Ewazen’s “Ballade for Clarinet, Harp, and String Orchestra.” Get in person tickets or livestream access here!

An active musician in the Denver area, Clarinetist Jason Olney never turns down an opportunity. He has played with orchestras like Denver Philharmonic, Longmont Symphony, Boulder Symphony and Steamboat Symphony, opera companies like Boulder Opera and Opera Steamboat, as well as a number of choirs, chamber ensembles and others. Just this year he has played Stravinsky’s L’histoire du Soldat, Verdi’s Il Trovatore and Dominick Argento’s virtuosic and absurd Postcard from Morocco, where he played clarinet, bass clarinet and alto sax. Since joining Arapahoe Philharmonic in 2016 as Principal Clarinet, Jason has performed solo concerts, chamber works and Copland’s Clarinet Concerto.

A teacher with an eclectic and varied background, Jason not only teaches clarinet but also saxophone and trumpet, and even runs several Beginning Bands. Before coming to Colorado to study under Dan Silver at the University of Colorado-Boulder in 2009, Jason worked with Drs John Masserini and Shandra Helman in Idaho. Jason continued his development in masterclasses by the acclaimed Imani Winds and Boulder’s own Takas Quartet.

We use cookies on our website to give you the most relevant experience by remembering your preferences and repeat visits. By clicking “Accept”, you consent to the use of ALL the cookies.
Cookie settingsACCEPT
Manage consent

This website uses cookies to improve your experience while you navigate through the website. Out of these, the cookies that are categorized as necessary are stored on your browser as they are essential for the working of basic functionalities of the website. We also use third-party cookies that help us analyze and understand how you use this website. These cookies will be stored in your browser only with your consent. You also have the option to opt-out of these cookies. But opting out of some of these cookies may affect your browsing experience.
Necessary Always Enabled
Necessary cookies are absolutely essential for the website to function properly. This category only includes cookies that ensures basic functionalities and security features of the website. These cookies do not store any personal information.
Non-necessary
Any cookies that may not be particularly necessary for the website to function and is used specifically to collect user personal data via analytics, ads, other embedded contents are termed as non-necessary cookies. It is mandatory to procure user consent prior to running these cookies on your website.
SAVE & ACCEPT