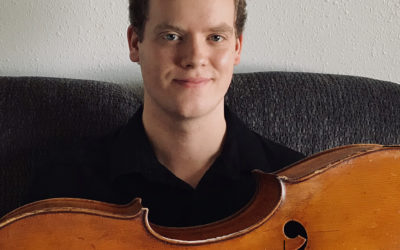 Ethan has played around the world for a variety of audiences. As an avid soloist, chamber, and orchestral musician, he has performed a wide variety of repertoire in venues across the United States, Italy, and Japan and has participated in numerous music festivals, including the Brevard (NC) and Innsbrook (MO) Music Festivals, and at the Accademia Musicale Chigiana (Siena, Italy). As a chamber musician, Ethan has worked with many notable ensembles, including the Tákacs, Calidore, Borromeo, and Beijing String Quartets. He has served as principal cellist of numerous orchestras, including the Denver Young Artists Orchestra, the Western States Honor Orchestra, the Pikes Peak Philharmonic, and the Brevard Concert Orchestra.

Ethan started playing the cello in the 3rd grade, as he hails from a family of musicians, his mother a flutist and his father a percussionist. He also holds a passion for arts education and outreach, whereas he’s given sectionals in various elementary and middle schools throughout Colorado, and offers private lessons for students of all backgrounds. Ethan is currently pursuing a Bachelor of Music at the University of Colorado Boulder, where he studies with David Requiro. Other teachers have included Annemarie Dawson, Benjamin Karp, Richard Aaron, and Robert deMaine. Outside of music, other interests include cycling, basketball, and spending time with his dogs when he can. Ethan is a passionate (and sometimes heartbroken) Boston Celtics fan.

We will be working to reschedule the March 27 “Apotheosis of the Dance” concert program, postponed due to COVID-19 precautionary measures, and will announce the new date as soon as possible.