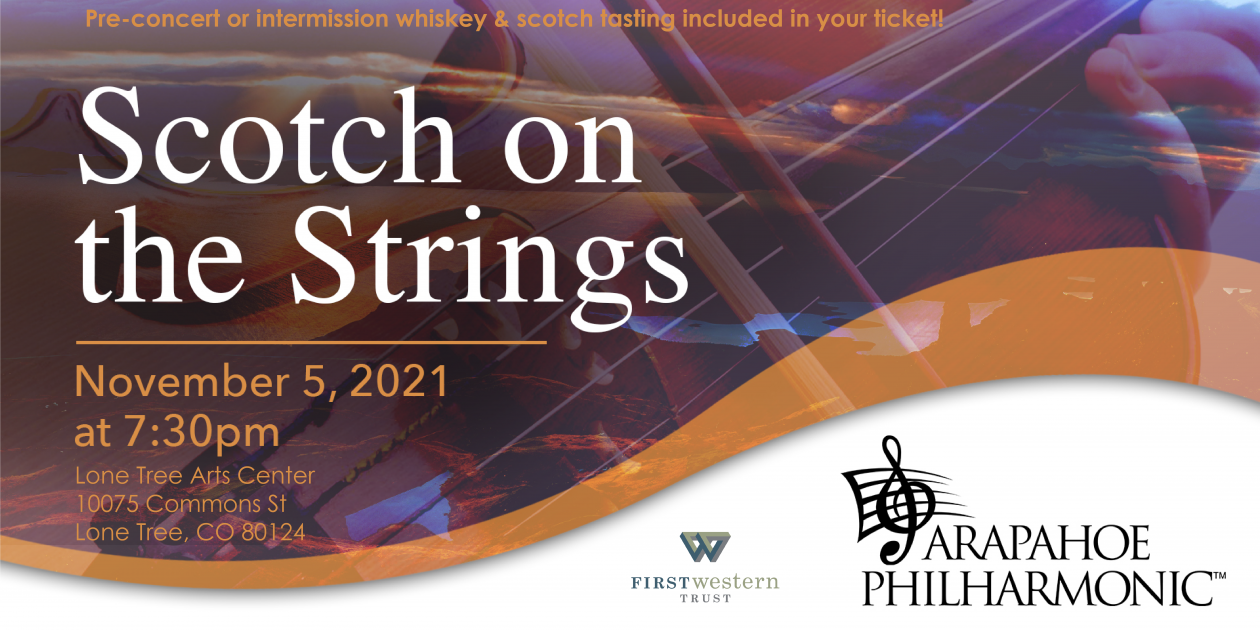 Get a taste of Scotland at “Scotch on the Strings”

Tickets are on sale now for “Scotch on the Strings” at Lone Tree Arts Center. This concert is not included in your season Ticket Trio, so make sure to get yours today!

Preconcert or intermission whiskey and scotch tasting included in your ticket!

Spend a merry evening with the Arapahoe Phil exploring the influence of Scotland on classical music. Travel the beautiful, rolling landscape of Scotland through Mendelssohn’s Scottish Symphony. Feel the rhythm of Scottish folk music in Malcolm Arnold’s “Four Scottish Dances,” and hear a legendary epic in Scottish composer Thea Musgrave’s “Song of the Enchanter.” Then raise a glass with Brahms’ “Academic Festival Overture”- an irreverent potpourri of drinking songs written for a university that awarded Brahms an honorary doctorate. From toe-tappers to glorious melodies, this concert has it all!

We use cookies on our website to give you the most relevant experience by remembering your preferences and repeat visits. By clicking “Accept”, you consent to the use of ALL the cookies.
Cookie settingsACCEPT
Manage consent

This website uses cookies to improve your experience while you navigate through the website. Out of these, the cookies that are categorized as necessary are stored on your browser as they are essential for the working of basic functionalities of the website. We also use third-party cookies that help us analyze and understand how you use this website. These cookies will be stored in your browser only with your consent. You also have the option to opt-out of these cookies. But opting out of some of these cookies may affect your browsing experience.
Necessary Always Enabled
Necessary cookies are absolutely essential for the website to function properly. This category only includes cookies that ensures basic functionalities and security features of the website. These cookies do not store any personal information.
Non-necessary
Any cookies that may not be particularly necessary for the website to function and is used specifically to collect user personal data via analytics, ads, other embedded contents are termed as non-necessary cookies. It is mandatory to procure user consent prior to running these cookies on your website.
SAVE & ACCEPT