Concert 5: Apotheosis of the Dance

March is Orchestras Feeding America Month! We will be collecting non-perishable food and toiletries donations for the students at Arapahoe Community Collage at the March 27 concert. View the list of needed items

More about the ACC Food Pantry

A food pantry is available in the Dean of Students Office on the Littleton Campus and behind the front desk at the Parker Campus. The food pantries are available during operating hours for each location. Students may visit once a week and take up to 7 items per visit. The Student Emergency Fund, through the ACC Foundation, as well as donations from the campus community, provides ongoing support in stocking the food pantries. Service Learning courses provide volunteers as well as conduct projects in support of the pantries. The food pantries continue to be utilized by students who are struggling with food insecurity or have unexpected situations arise that put them in a position of needing assistance. Last semester, we had nearly 300 visits to our on campus pantries.

Click on the composers’ names to learn more about their lives and works. 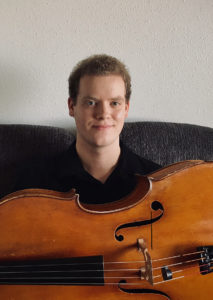 Ethan Blake has played around the world for a variety of audiences. As an avid soloist, chamber, and orchestral musician, Ethan has performed a wide variety of repertoire in venues across the United States, Italy, and Japan. He has participated in numerous music festivals, including the Brevard (NC) and Innsbrook (MO) Music Festivals, and at the Accademia Musicale Chigiana (Siena, Italy). As a chamber musician, Ethan has worked with many notable ensembles, including the Tákacs, Calidore, Borromeo, and Beijing String Quartets. He has served as principal cellist of numerous orchestras, including the Denver Young Artists Orchestra, the Western States Honor Orchestra, the Pikes Peak Philharmonic, and the Brevard Concert Orchestra.

Ethan started playing the cello in the 3rd grade, as he hails from a family of musicians, his mother a flutist and his father a percussionist. He also holds a passion for arts education and outreach, whereas he’s given sectionals in various elementary and middle schools throughout Colorado, and holds private lessons for students of all backgrounds. Ethan is currently pursuing a Bachelor of Music at the University of Colorado Boulder, where he studies with David Requiro. Other teachers have included Annemarie Dawson, Benjamin Karp, Richard Aaron, and Robert deMaine. Outside of music, other interests include cycling, basketball, and spending time with his dogs when he can. Ethan is a passionate (and sometimes heartbroken) Boston Celtics fan.

“This piece aims to explore the landscape of Colorado gun violence through the varying perspectives of students, those who have aged beyond the classroom, and a community who love and are loved by students. The piece features a libretto by Denver’s second Youth Poet Laureate Xuan Chi Sullivan, which will be sung by baritone and Coloradan Luke Sutliff.” — Jack Frerer, composer

The “exuberant” and “delicious” (Boston Musical Intelligencer) music of Jack Frerer (b. 1995) has been performed across the US, Australia, Europe and Asia, and will performed this season by ensembles including the Nashville Symphony, the Arapahoe Philharmonic, the Albany Symphony’s “Dogs of Desire” ensemble, the Australian Youth Orchestra, and the UT Austin Wind Ensemble, among others. Jack is the recipient of a Charles Ives Scholarship from the American Academy of Arts and Letters, a Morton Gould Composers Award from ASCAP, the Suzanne and Lee Ettelson Composers Award, and the Brian Israel Prize from the Society for New Music, and winner of both the Juilliard Orchestra and Gena Raps Chamber Music competitions. He was a Tanglewood composition fellow for 2019, a composer for the New York City Ballet’s 2019 Choreographic Institute, and is currently Composer-in-Residence with the Arapahoe Philharmonic. Jack studied with John Corigliano and Robert Beaser at The Juilliard School. 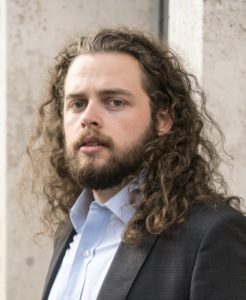 A native of Lakewood, Colorado, baritone Luke Sutliff is a first year master’s candidate at Rice University under the tutelage of Dr. Stephen King. He is making his Opera Theatre of Saint Louis debut as a Gerdine Young Artist, and will be singing the role of Elder McLean in Susannah and covering Morales in Carmen. This past fall, he appeared as Mr. Johannes Zegner in Proving Up by Missy Mazzoli at Rice University. He previously graduated from The Juilliard School where he studied with the late Sanford Sylvan. Mr. Sutliff has spent two consecutive summers at The Chautauqua Institute where he performed as Demetrius in A Midsummer Nights Dream, Hucklebee in The Fantasticks, Belcore in L’elisir d’amore, Escamillo cover in Carmen, and made his concert debut with the Chautauqua Festival Orchestra. In his last year at Juilliard, he covered Aeneas in their production of Dido and Aeneas which toured to Holland Park and the Palace of Versailles. Previously that year he made his Alice Tully Hall debut. In past seasons at Juilliard, he has appeared as Jupiter in Orpheus in the Underworld and The Herald in The Burning Fiery Furnace. Mr. Sutliff has also premiered Samuel Zyman’s Viento, Agua, Piedra, Jack Frerer’s Four Frost Songs, Let Them Eat Cake by Trey Makler, and will premiere Jack Frerer’s splinter.

Meet the Instrument of Hope 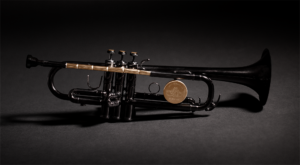 The Instrument of Hope (IOH), is a trumpet crafted of bullet casings by Shine MSD, Inc., a non-profit started by student survivors of the 2018 Marjory Stoneman Douglas High School shooting in Parkland, Florida. The IOH is on a cross-country tour with famed musicians to revitalize the conversation around gun violence. Shine MSD is a non-profit organization founded in the aftermath of the shooting, which uses the arts to promote healing for the Parkland community.

The IOH began its “tour” in Oakland, California, on February 19, 2019, when Panic! At The Disco was the first band to promote its message of hope. The IOH has since been played by many bands, trumpeters and educators across the nation. The IOH performed the National Anthem to open a Miami HEAT basketball game, with The Who, Mannheim Steamroller and Carnegie Hall by Justin Nurin, and made its Broadway debut at a performance of Oklahoma! Bobby Shew, Randy Brecker, Keyon Harrold, Theo Croker, Bria Skonberg, Dave Douglas, Riley Mulherkar, Tony Glasi and several others have also performed with the IOH.

There is no formal schedule for the tour. The goal is that the trumpet will be passed from artist-to-artist and teacher-to-teacher for the foreseeable future. Joe Garrity, President of Shine MSD, stated, “After writing Shine its co-writers realized that music could be an expression of remembrance and resilience. They also learned that music could capture the public’s attention. Looking to honor the memory of those lost to gun violence and make a lasting statement against it, the Instrument Of Hope was the perfect project. We are forever grateful for the support of all the musicians that have helped to amplify Shine MSD’s message of hope and healing through the arts.”

“Jumping in the air, tearing his arms asunder, hiding under the podium,” are just a few of the descriptions from Beethoven conducting the premiere of his Symphony No. 7. One is moved to jump out of the seat and boogie-woogie, upon hearing the intoxicating elixir of rhythms and tunes from Beethoven’s most popular Symphony. Composer-in-residence Jack Frerer will present his newest creation, and our latest T. Gordon Parks Concerto Winner will dazzle you like no other.

The Arapahoe Philharmonic is sincerely grateful to Universal Music Company, and owners Millie and Jim Patterson, for their ongoing support of the T. Gordon Parks Concerto Competition.

We proudly partner with SoHa Happenings in Colorado™ and The Scen3.